The Harmony of the Worlds - Kepler's Ideas on Music

Title: The Harmony of the Worlds - Kepler's Ideas on Music
Introduction Music: Chaconne for Violin - J.S. Bach
Narrated by Nicolas Caporale and recorded on September 17th, 2007

Exit Music: In me transierunt - a motet by Orlando di Lasso

Johannes Kepler was a German mathematician, philosopher and astronomer who lived between 1571-1630.  One of his biggest contributions to the study of astronomy was his three laws of planetary motion. Without delving too deeply into physics, basically these laws state that planets orbit the sun in ellipses rather than circles, and that the planets travel faster when closer to the sun and slower when farther away from the sun. It also states that planets with larger orbits move slower than those with smaller orbits. His work was grounded in the idea that God created the world according to a specific plan, and that plan could be realized through reason. In 1619 he wrote Harmonices Mundi (translated as The Harmony of the Worlds) which in certain sections investigates musical harmony in relation to planetary motion.

When we think of Kepler we generally don’t think about how much music was a part of his life. His discoveries and theories in the different areas of math and science tend to take the spotlight away from the other aspects of his life. In school and throughout his adulthood he was surrounded by music and as part of his schooling was required to participate in many musical activities each week. When Kepler was as young as five years old he practiced Latin hymns and sequences as well as German psalmody in school everyday; he also had weekly theory lessons to compliment his musical training. As a theology student at Tübingen he studied music along with all of his other fellow students. Singing three times a week to keep musicianship sharp was encouraged by the school and during this period Kepler participated in many musical gatherings. In 1600 he went into the service of Emperor Rudolph II in Prague, where practical and theoretical music on the court were equally appreciated. Here experimental instruments like the “perspective lute” which tried to relate color with musical tones and automatic keyboard instruments that played when exposed to sunlight were born. It was also here that Kepler tried to notate a Turkish priest’s prayers as the priest sang them for the Turkish ambassador. So, throughout Kepler’s life he was surrounded by and was either actively or passively a part of music. Around this time Kepler began advocating a new method of tuning (though he did not create this method). Previously instruments were tuned using the Pythagorean method, which is intended to make intervals of fourths and fifths as perfect as possible. However, this meant that intervals of a third and a sixth could not be perfect. This was acceptable though because fourths and fifths were the most common intervals in medieval music and thirds and sixths were considered dissonances. However, as philosophies changed during the Renaissance thirds and sixths were now considered consonant and more desirable so a different tuning method was needed so that these intervals would sound “in tune”. Just intonation was devised and to support it Kepler stated

[Pythagoreans] were so much given over to this form of philosophizing through numbers that they did not even stand by the judgment of their ears, though it was by their evidence that they had originally gained entry to philosophy; but they marked out what was melodic and what was unmelodic, what was consonant and what was dissonant, from their numbers alone, doing violence to the natural prompting of hearing.

Regardless of which tuning system is being used, the intervals between notes are measured in ratios, such as 3:2 or 3:5. Although Pythagorean tuning looked better in theory, Kepler valued practical judgment over numbers alone. By only using numeric ratios to devise musical intervals was foolish, as the ear would tell you that this is not practical.
Complex polyphonic music of the Renaissance replaced the monophonic music and simpler polyphonic music of the medieval period. Polyphony, for those of you unfamiliar with the term, is a type of musical texture that has more than one independent melody played together. Monophony is simply one melody sounded at a time. Gregorian chant is monophonic, but a Bach fugue is polyphonic. When there is one dominant melody supported by chords, we refer to that texture as homophonic. Kepler was trained in music dating back to the early medieval period through his present day. He was particularly fond of the late Renaissance composer Orlando di Lasso, of whom Kepler cites many times in Harmonices Mundi. More precisely, it is one of di Lasso’s motets entitled In me transierunt that receives the most attention from Kepler. To Kepler, the planets in orbit sang together in harmony a la di Lasso’s harmonies creating a “cosmic motet” In Harmonices Mundi Kepler writes that with the advent of “modern” polyphony God reveals to us the secrets of the creation of the universe.

In this “cosmic motet” Kepler assigns a part to each known planet. Mercury gets to be the soprano voice because it is a “treble voice and is the most free”. Earth and Venus share the alto voices because of their “narrow distances between motions” and because “the alto which is nearly the highest is in a narrow space.” Mars gets to be the tenor voice because it “is free yet proceeds moderately.” Saturn and Jupiter share the bass voices because the “basses make harmonic leaps.” Each voice sings an independent song simultaneously creating a complex polyphonic work. Kepler notes that as the six songs interweave they create passing dissonance, as well as syncopations and cadences. When each planet reaches its farthest and closest distances from the sun it creates a rare consonance with the other planets. Of course Kepler notes that the planets do not actually make sound as they pass around the sun, but that the “cosmic harmony reflects the relative minimum and maximum angular velocities of the planets, as measured from the sun”. In other words, the differences between the minimum and maximum angular speeds of orbiting planets correspond directly to a harmonic ratio. Earth’s ratio is 16:15 which happens to be a semitone or half-step. In the six note hexachord system of Kepler’s time the half-step was found between only between mi and fa. In the cosmic motet Earth sings mi and fa, which also happens to be the first two letters of the words misery and famine. I guess this is what Kepler believed the Earth had to contribute to the polyphony of God’s universe. Di Lasso’s In me transierunt also opens with this semitone pattern, using mi, fa, mi. This may be why Kepler cites this motet so much in Harmonices Mundi. As to how the planets move, Kepler states

They advance from one extreme to the opposite one not by leaps and intervals, but with a continually changing note, pervading all between (potentially infinite) in reality. I could not express that in any other way but by a continuous series of intermediate notes.

Johannes Kepler made it clear that he himself was not a composer or even a very good musician. However, he understood music theory pretty well and was able to draw parallels between music theory and astronomy by using mathematics ratios. The fact that this comparison was more than just metaphor sets him apart from others who shared similar beliefs during and before his time. He believed that musical notes should not be governed by numbers alone because the resulting music ended up impractical. Kepler also liked to stress the importance of the practice of music over the theory of music. 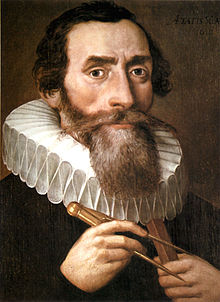