The French Horn vs. The English Horn, Part I

There are many differences between the English horn and the French horn, and each horn musician, respectively, is more than willing to explain the differences between the two. To those of us stringed instrument players and players of different instruments, or those of you not familiar with the two different horns at all, the naming of these two can be rather confusing. After all, the English horn isn’t really a horn, and really isn’t English either. The French horn is a horn, but not exactly French. And isn’t a horn something that grows on the head of an animal anyways?

Since prehistoric times, animal horns have been used by humans to create sounds, but not necessarily for music. By blowing air through a hollowed-out animal horn, the air vibrates the horn, which resonates inside, and the conical opening amplifies and projects the sound. Eventually, animal horns were duplicated with wood or metal and used the same way. The ancient Scandinavians used an instrument called the Lur, which looked like a wooly-mammoth tusk, in war to rally troops and scare the enemy.

In the early 17th century hunting became a popular aristocratic sport, and the horn was used in the hunt. The horn became curved rather than just being a straight piece of metal. Hunters began experimenting with different shapes as it was realized that this affected the sound and what range of notes could be played. In 1636 Marin Marsenne described four different types of horns in his book, Harmonie Universelle: Le grand cor, which means the big horn, le cor qui n'a qu'un seul tour which means the horn which has only one turn, the cor à plusiers tours, which means the horn of several turns, and le huchet which means the horn with which one calls from afar. These horns began to be introduced in concert halls, though they were usually used as special effects to help depict the hunt on stage because the method of playing them was too still too crude to be blended with an orchestra. Count Franz Anton von Sporck is credited with bringing the art of horn playing from France to Bohemia where a more refined method of playing the horn developed there, and as well as Austria and Germany. The Count was a hunting aficionado as well as a generous patron to the arts. Sometime in the 1680’s the Count was participating in a hunt in France and when hearing the cor de chasse (which was a type of horn to be heard from afar) being played during the hunt he instructed two of his men to be taught how to play it.

As the horn grew in popularity, Baroque composers began to write more refined parts for the horn, as the technique for playing began to be more refined. Since the instrument was simply a curved tube of metal it was limited to sounding the natural frequencies of which the metal was able to vibrate. This includes the fundamental pitch, as well as all the other notes along the harmonic series. The harmonic series is a series of notes that are double, three times, four times, etc. the frequency of the fundamental pitch and are very important to brass instruments. By manipulating a brass instrument these different harmonics or partials as they are often called can be individually sounded. Each harmonic gets closer and closer together as the series progresses, beginning with an octave, then a fifth, to eventually seconds and even smaller. If you thought that was too much physics for a music lesson, just know that the early horns were able to play multiple notes, but were limited to a series of notes related to one key signature. So, when a horn player had to play in a different key, he or she had to grab a different horn that had a different length of tubing, allowing a different series of notes. In the early 1700’s it was realized that by adding a length of tubing to one horn was more practical than carrying around multiple horns and thus the crook was invent. The crook was a piece of curved tube that could be attached to the horn, giving the tubing additional length. Now, the player could simply carry around his horn (which was usually pitched at Bb or F) and multiple crooks rather than carry around multiple horns. In the mid 1700’s a virtuoso horn player by the name of Anton Hampel playing on the Dresden court developed a technique that involved placing the right hand inside the bell of the instrument, which altered the pitches that sounded. By adjusting the hand, notes OUTSIDE of the harmonic series were able to be played, and combined with the use of crooks for the mouthpiece and middle of the horn, the horn of the Classical era (known as the Orchestral Horn) was a pretty versatile instrument. Mozart and Haydn wrote some very notable pieces for this horn, the most famous being Mozart’s horn concerti. Catch the third movement to Mozart’s 4th concerto at the end of this episode.

In the early 1800’s the valve was invented to automatically switch the flow of air through other lengths of tube included on the instrument. The piston valve was first invented which led to the rotary valve in the mid 1800’s. By the end of the 1800’s the rotary valve was more popular than the piston valve, and crooks were no longer needed along with the hand horn technique. These horns used three triggers to control three valves and in 1897 the first “double horn” was introduced by a German horn maker. The double horn consisted of two horns combined into one, with a fourth trigger to activate the other tubing. The second horn was pitched higher which allowed for clearer and easier-to-control notes in the higher registers. Now the triple horn, which combines an even higher pitched horn, is gaining popularity amongst professional horn players.

So after listening to me talk about all the German innovations to the way the instrument was played and built, why do we not call it the German horn? Well, actually the U.S., Britain and Canada are the only countries to really refer to this instrument as the “French” Horn. Most of Europe has always has and still does refer to it as simply “the horn” or “horn in F”. Nobody knows for sure why it became known as the French horn. The distinction was probably made back in its days as being primarily used as a hunting instrument. It could be that it was in France that the Germans got the idea from when the technique was brought to them by Count Franz Anton von Sporck. Another more popular possibility is that the British and French hunting horns differed in size, and the size of the horn eventually used in the orchestra reminded the British of the hunting horns used by the French. 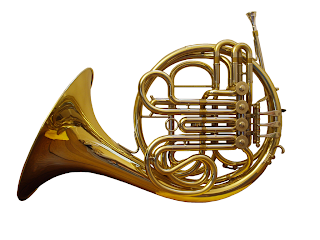