The French Horn vs. The English Horn Part II

The oboe family of instruments evolved from the European shawm, which in turn evolved from the surnay of the Middle East. All of these instruments function almost the same way, by forcing air through a double-reed that is attached to a wooden tube. A double-reed is made by taking a stem of grass or cane (hence the name reed) and folding it in half. It is then scraped until it is thin and the two ends can vibrate against each other. Reeds don’t usually last too long so they have historically been made by what is readily available. The modern oboe reeds come from the Arundo donax plant, otherwise known as the Giant Reed. This plant grows in moderately saline waters in semi-tropical regions. Other instruments that use double-reeds are the bagpipe of Scotland, and most likely the aulos of ancient Greece. On a side-note, the aulos can be seen being played in the movie “300” as the Spartans march into battle. The aulos probably did accompany Spartan kings into battle so this is one point the movie actually got right.

As I’ve already mentioned the oboe developed from the double-reed instrument called the shawm, which was popular in Europe from roughly the 12th century until the 17th century. It appears that the oboe began to emerge as a different instrument from the shawm in the mid 17th century in France. At this point in time both the shawm and this new instrument were both referred to as the hautbois, which means “high wood”. Jean-Baptiste de Lully, a French baroque composer helped form what became known as an orchestra by combining wind instruments with stringed instruments. The early oboe now had to be able to play along and blend with the strings, which the shawm wasn’t able to do. The instrument was lengthened, the reed was altered and the holes were drilled differently which allowed more versatile fingerings as well as requiring less air pressure from the player. In 1685 King Louis XIV renounced the Edict of Nantes causing many Protestants to leave France. This would have a damaging effect on France but one positive effect was that the exodus of protestants, which included many skilled and industrious individuals (such as musicians) helped spread the oboe over Europe; French music and musicians were well received throughout Europe, in places like Madrid, London, Vienna and Venice. At this point the oboe lost all of its ties with France with the exception that throughout Europe the name for this instrument was based on the French name of hautbois.

In the late 1600’s the oboe was primarily used in bands much like how the shawm was used, but by the end of the century composers began including it in their chamber music compositions. From roughly 1700-30 we find some of the most innovative profound music ever written during one particular period of the oboe’s history. After 1730 however the manufacturing of the oboe began to use different methods in different parts of Europe. This caused the oboe (still called the hautbois) to vary in shape and sound depending on where it was made. The virtuoso hautbois of Europe during this time were actually found in Italy, rather than France. The Italian virtuosos that traveled through Europe helped standardize pitch, which had a’ at 440 cycles per second. This frequency had long been the standard in Venice and now was being spread throughout the continent. This standard remains today in Western music.

As the oboe was being built differently all over Europe, different sizes were being built to allow different ranges of notes to be played. The oboe da caccia, which was curved and leather-covered, was pitched in F to be a tenor oboe. It was only produced in a few places in Central Europe. Shortly after 1720 someone added a bulbed-bell to the oboe da caccia (which created a new instrument) and later in the century they were built with a gentler curve. Eventually the oboe da caccia with a bulbed-bell was built to be straight, but during this time while both curved and straight tenor oboes were being built they reminded people of the horns that Angels played, as portrayed in medieval and later religious artwork. In Middle German the word for “angelic” was engellisch. The word engellisch also meant English and eventually the two meanings became merged causing the “angelic” horn to be the “English” horn.

By the late 18th century, the english horn became closely associated with Italian opera and in the early 19th century it became an established instrument in France. Hector Berlioz used the English horn a lot in his earlier works. Oddly, in the mid 19th century German orchestration books barely even mentioned the instrument. It became popular in Germany again when Richard Wagner heard the english horn in Paris and returned to make extensive use of the instrument in his compositions. By the end of the 19th century and early 20th century it was now an established solo voice within the orchestra (meaning that it wasn’t interchanged with the oboe). The English horn is now used in solo, chamber and orchestral works alike.

Hopefully after listening to this episode and the previous episode you will now be able to explain the differences between the French and english horns to an inquiring individual. To recap, the French horn’s history is rooted in the actual horn of animal, justly giving it the right to be called a horn. The english horn is called a horn only because it reminded people of the horns that angels played in medieval artwork. The French horn as we know it today developed mostly in Germany but is called French because the concept and playing style probably was borrowed from France and the modern French horn does resemble the hunting horn used in France at the time it began being developed for use as an instrument. The English horn as we know it today developed in Central Europe between Germany and Italy but is called English because the German word for Angelic and English were the same, and remember it was named so because it resembled the horns that the angels played in medieval artwork. And, most importantly, the english horn is made from wood and uses a double-reed to produce sound while the French horn is made completely of metal and uses the buzzing of the lips on the mouthpiece to produce sound. Both instruments take great skill and a lot of patience to master because a good, clean tone is not easily produced without a lot of practice. 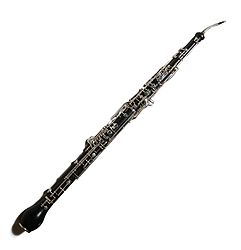