In 1815 and the next decade that followed the best and worst would be brought out in Beethoven. A fierce custody battle for his nephew would bring out the worst in Beethoven, and he also continued to develop habits of treating everyone around him poorly as his health slowly declined. It is now believed that Beethoven was suffering from lead poisoning, starting from the time that he began going deaf. In December of 2005 the U.S. Energy Department’s Argonne National Laboratory conducted tests on some of Beethoven’s bone and hair samples confirming this theory. Consequently, hearing loss, irritability, aggressive and anti-social behavior are all symptoms of lead poisoning. It is not clear whether he was exposed to large amounts of lead or if he suffered from a condition which makes the body store toxins instead of getting rid of them normally. Nevertheless, Beethoven was still able to keep a close circle of supporters through the end of his life. Since he was deaf, he kept conversation books to use as a form of communication with others. Many of these books were destroyed by his friends after he died to protect Beethoven’s image.

When his brother, Karl, died in 1815 he left a son, also named Karl, behind. Ludwig fought for sole custody, even though he never paid the boy much attention before his brother passed away. During this period in Austria there were two judicial courts, one for nobility and one for commoners. During this custody battle over Karl, with his mother (Beethoven’s sister-in-law) Beethoven did everything he could do to blacken her reputation. He eventually won sole custody over Karl, when the boy was 20 years old. However, Ludwig and Karl’s relationship was extremely strained (as Ludwig tried to keep him away from his mother at all costs) and as a result in 1826 Karl attempted suicide by shooting himself in the head. Luckily he failed, but this made Ludwig realize that even though he had won in court, he had lost emotionally. After this Karl was able to go live with his mother. Ludwig would die the following year.

Despite this turmoil at the end of his life, Beethoven was able to compose (though not as frequently) some of his most mature pieces of music. During this period we composed his last five piano sonatas between 1816 and 1821, the Missa solemnis in 1822, the Diabelli Variations in 1823, the Ninth Symphony in 1824, and his last quartets (including the Grand Fugue) in 1825 and 1826. Beethoven was only able to hear this music inside his head alone. It is extremely remarkable he was able to compose such masterpieces in such a state. The music of this time in his life became more concentrated and abstract. Classical elements remain but are obscured by his own innovation. The division of phrases of music is often blurred and themes and motives were worked out until exhausting every possibility. Beethoven admired J.S. Bach his entire life and in the later years of Beethoven’s life we see an influx of contrapuntal textures. He gave much importance to fugal texture, as we see in the double fugues in the finale of the Ninth Symphony, the massive Grosse (Grand) Fugue for String Quartet as well in development sections or large movements themselves. A fugue, for those of you unfamiliar with the term, is basically a section of music that begins with a theme or melody (called the subject), and is repeated throughout different parts while the original parts play different complimenting melodies after they initially play the original theme. Fugues can be extremely complicated and take careful planning to write out, The Missa solemnis was written for the enthronement of Archduke Rudolf in 1820 but it took him a few years to complete it. This Mass is considered to be Beethoven’s most spiritual works and is also thought to be a reflection of Beethoven’s own relationship with God. Beethoven himself considered this his best work.

Beethoven’s Ninth symphony premiered on May 7th, 1824 to a full house. However, the expense of running the program was so great that Beethoven saw little of the profit. What marks this symphony as a pinnacle in the history of the medium is its use of a chorus and solo voices in the finale. Beethoven chose stanzas from Schiller’s “Ode to Joy” that embraced his own ideals of universal fellowship through joy and love for an external heavenly Father. As a matter of fact, Beethoven had wanted to use this text since 1792 but had not until now. Beethoven insisted on conducting the premier but unbeknownst to him another conductor sat out of sight keeping the time. As I mentioned in an earlier episode when the finale was over, Beethoven had to be turned around because he could not hear the overwhelming applause from the audience.

When Beethoven died on March 26, 1827 he had plans of writing a Tenth Symphony, but was obviously not able to finish it. Beethoven entered music history at the end of one musical era and helped propel the next one into prominence. The time period we now refer to as the Romantic era was just starting to gather steam at the end of Beethoven’s life, and his music ensured that composers over the next several decades would have several milestones and innovations to take the art further away from the ideals of the Enlightenment and towards the emphasis upon human emotion and nationalism. 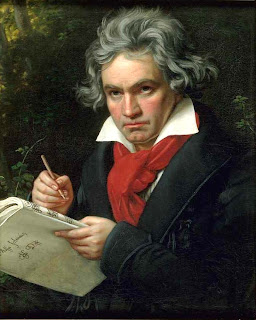